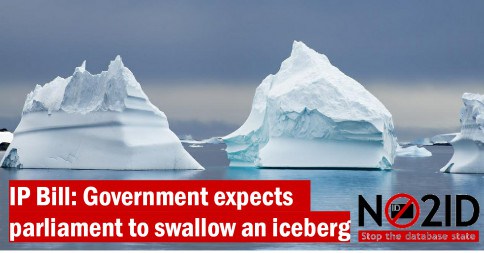 Picture Attribution 2.0 Generic (CC BY 2.0) - https://flic.kr/p/dKKiPo by Christopher Michael — Picture has been edited to include captions and our logo.

The new draft surveillance bill is like an iceberg, with a vast bulk of technical change obscured beneath the surface. Theresa May, the Home Secretary, presented the Investigatory Powers Bill to parliament as a measure "consolidating and updating our investigatory powers, strengthening the safeguards".

But it amounts to a dramatic alteration in the powers already available not just to the intelligence services, but to police, tax inspectors, and officials and regulators in almost every department of state.

If enacted, it would replace several pieces of complex and technical legislation.

The real issue is the tens of thousands of surveillance actions a day carried out by officials. The Bill is an iceberg. It is easy to focus on the sunlight glinting on a few peaks, it is harder to grasp the important bits beneath the surface. What is clear is that Parliament is expected to deal with all of this before the expiry of the Data Retention and Investigatory Powers Act at the end of 2016 – to swallow the iceberg before its dimensions can be fathomed.

After 10 years, our funds are depleting. If we're to continue fighting against the database state, we urgently need your support. You can make a donation via Paypal, BACs, cheque, or postal order.

NO2ID is a campaigning organisation. We are a single-issue group focussed on the threat to liberty and privacy posed by the rapid growth of the database state, of which “ID cards” were the most visible part. We are entirely independent. We do not endorse any party, nor campaign on any other topic.

We aim to publicise the case against state control of personal identity among the general public, in the media, and at every level in government. NO2ID’s members are from all sorts of backgrounds and hold all sorts of opinions on other questions. They almost certainly include people much like you. Please support us.

The 'database state' is what we call the tendency to try to use computers to manage society by watching people. There are many interlocking government plans that do this. Together they mean officials poking into your private life more than ever before.